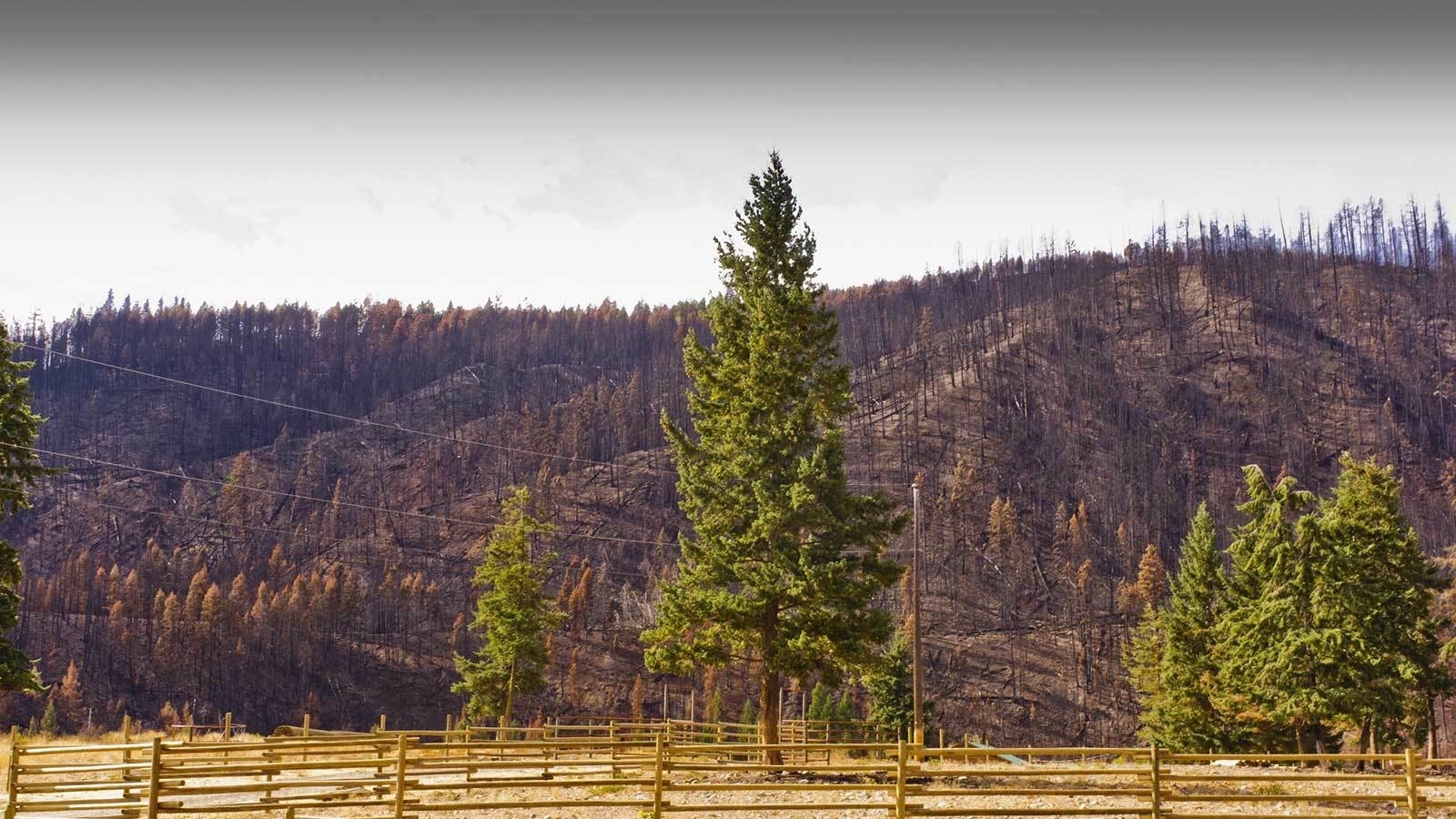 An Emerald Isle Amid a Sea of Ashes

Our Lady of Good Help and the Miracle of Champion, Wisconsin

Spiritual wildfires have been raging in America in recent years. In the form of homosexual “marriage,” pornography, transgenderism and a rise in Satanism, among others, moral depravity leaves our cultural landscape desolate. Hundreds of thousands of souls have suffered. These “fires” have engulfed families and social structures. Many have lost hope in fleeing from the flames.

But our Catholic Faith offers us another solution. Our Lady’s offer to make her Immaculate Heart our “refuge and the path that will lead (us) to God,” provides a shelter for all who seek it. This lesson can be learned from the great Peshtigo Fire of 1871 in which a group of faithful Catholics relied upon Our Lady of Good Help’s intervention. The miracle which followed was evidence of her power to protect.

The Peshtigo Fire happened on October 8th, 1871—the same day of the Great Chicago Fire that is so well known in American history.

Though overshadowed by the Chicago Fire, the Peshtigo blaze killed more people (around 2,500) and destroyed more property—over 1.2 million acres.

The magnitude of the miracle can be gauged by the destructiveness of the fire. It started in the city of Peshtigo, Wisconsin, an hour north of Green Bay. Father Peter Pernin describes the ferocity of the blaze in a gripping firsthand account in his book, The Great Peshtigo Fire, An Eyewitness Account.

No one knows how the fire started. What was known was that it was made worse by a particularly dry year and hurricane strength wind. Fire was, so to speak, in the air. On October 6th, Father Pernin saw a stump spontaneously burst into flames, even though there were no sparks or fire nearby. While the fire was put out, it signaled worse things to come.

Preparing for the Worst

For days, the priest had seen a red glow some distance away. He also heard loud noises in the distance like the sounds of numerous carts and trains. As the noise and the glow grew closer, Father Pernin decided to prepare for the worst.

It took him several hours to dig a pit in the ground to bury sacred objects, statues, books, linens and vestments under a foot of dirt, which he considered sufficient. In the meantime, several of his neighbor’s guests laughed at him for making this effort.

Heading into an Inferno

As he finished covering his pit, Father Pernin barely had time to release his horse and load the tabernacle into a hand cart, before the wildfire reached Peshtigo. He called for his dog but it refused to budge from under the bed, frozen in fear.

As he went through the city to head for the river, he was blown against the tavern wall, cart and all by the force of a sudden wind. He forced his way against the wind and came upon his horse which was now frozen in fear and refused to move.

The conflagration was soon upon the village and everything was in chaos. The clang of carts, the neighing of horses, the alarmed cries of beasts, and the roar of the inferno instilled a terror in the hearts of the living. People ran in all directions. Father Pernin tripped and fell upon the dead bodies of a mother and her daughter.

The End of “Our World”

Along one side of the river, the flames from the village buildings formed an impenetrable canopy of fire. Father Pernin went to the other side. At the edge of the water, he found people “as far as the eye can see” standing, gazing, in stunned amazement and with mouths agape, at the sight of the conflagration around them. He started pushing them into the water since it was the only safe place. Immediately people followed suit and everyone around him waded in the water.

The air became a mixture of ash, sparks, smoke, fire and oppressive heat. Everyone stayed in the cold water splashing water over themselves for almost five hours. At the peak of the fire, Father Pernin described the air above them as a tornado of fire, brighter than day even causing temporary blindness. It was a scene of hell on earth, a true inferno.

A lady next to the priest asked, “Father, is this the end of the world?” Not knowing what to say, he replied perhaps not the whole world, but if the surrounding countryside were burning like this, it would be the end of “our world.”

The fire eventually burned itself out in Peshtigo, jumping across a nearby bay, a distance of about 10 miles at its narrowest point. With the hurricane-like winds serving as bellows, the fire continued on its destructive path eventually burning a total of 1.2 million acres.

The Miracle of Champion, Wisconsin

While this chaos took place in Peshtigo, there was a different scene at the village of Robinsonville, Wisconsin. Now called Champion, this village lay right in the path of the untamable inferno.

In the early morning of October 9th, the locals fled to the safety of Our Lady of Good Help’s protection. It seems irrational to seek safety in a wooden structure in the middle of the greatest wildfire in American history. However, faith sometimes goes against what seems rational. They abandoned themselves to practice the great virtue of confidence, hoping against all hope. The locals had so much confidence in Our Lady’s protection that they drove their livestock onto the chapel grounds.

Sister Adele led the inhabitants in a procession outside with a statue of Our Lady while praying the rosary. When the air became oppressive, they were forced to continue inside. The voices of the faithful filled the air with hopeful prayer. Outside the ever-hungry inferno was raging, ready to devour everything in its path.

However, the wooden structure miraculously refused to burn. The prayers of the faithful were heard. The heavy winds that drove the conflagration stilled and the fired abated. The sweet sound of rainfall soon followed. It was as immediate as when Jesus raised his hands to calm the storm. The faithful were in awe. Salvation from the fire had finally come.

Confirmation of the Miracle

Father Pernin, who witnessed firsthand the unyielding savagery of fire in Peshtigo went to investigate this alleged miracle with his own eyes. He recounted what he saw in a second manuscript called, The Finger of God.

“[All] the houses and fences in the neighborhood had been burned, with the exception of the school, the chapel and fences surrounding the six acres of land consecrated to the Blessed Virgin. (…) [The property] sanctified by the visible presence of the Mother of God now shone out like an emerald island amid a sea of ashes.”1

Father Pernin’s description of the church grounds as an emerald island in a desolate sea could be seen in the grass inside the fence that kept its lush healthy color. All the local inhabitants and their livestock were spared. The wooden chapel was spared. The wooden fence surrounding the grounds was spared.

Is there not a lesson to be learned from this?

This miracle was instrumental in convincing Bishop David Ricken to declare on December 8, 2010 the authenticity of the apparitions of 1859 to Sister Adele Brise. This holy site is now called the Shrine of Our Lady of Good Help. In the decree, one can find these words that serve as a lesson to modern firefighters, or to anyone who needs divine help, especially when all human efforts have failed. These words are: “Our Lady has lessened or relieved the burdens of the People of God (…) even through diminishing inclement and tempestuous weather.”

Curiously, the great Peshtigo Fire abated on the 12th anniversary of one of the apparitions of Our Lady of Good Help.

A Lesson for Our Times

The events that unfolded in Champion, Wisconsin, so many years ago are almost a prefigure of our times. The fires of impurity and godlessness rage all around the People of God. Human efforts alone, though at times even heroic, are not sufficient to quell the flames. We need recourse to Our Lady.

At Fatima, she told little Lucia, “My Immaculate Heart will be your refuge and the path that will lead you to God.” These very words reverberate into and beyond 2020. If we stop and listen, we can hear her say them to each and every one of her children. Our Heavenly Mother beckons us to gather in confidence around her, praying her Holy Rosary, just as Sr. Adele and the faithful did in 1871.

It is no small coincidence that the town once called “Robinsonville” has been renamed “Champion.” For it was on this precious ground, right here in our United States, that Our Lady chose to answer the pleas of her children, thereby showing all the world that she would happily become our Champion, if we only would turn to her in confidence and love.