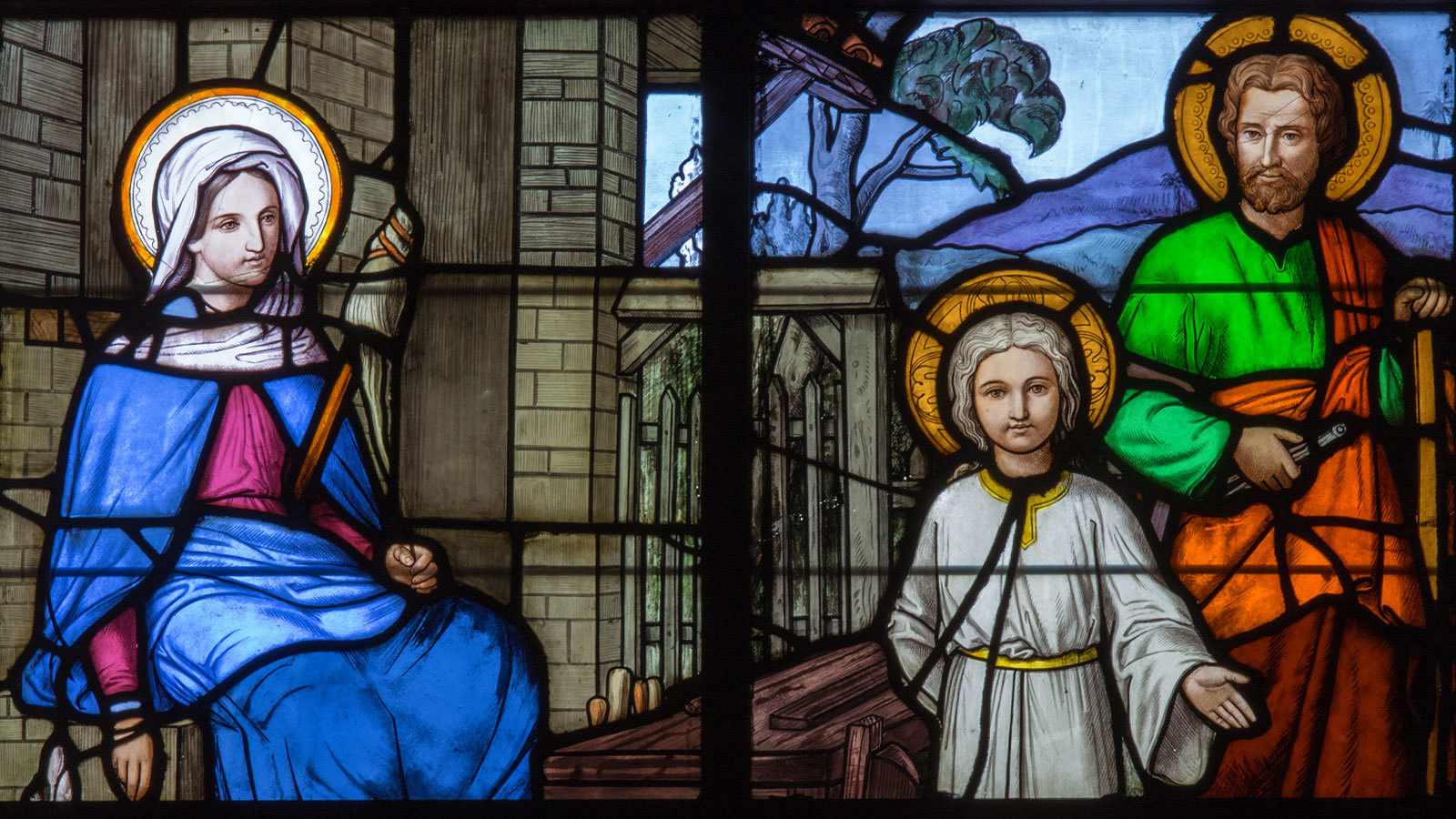 Honor Thy Father & Thy Mother

"Children, obey your parents in the Lord, for this is right. Honor your father and mother that it may be well with you and that you may live long on earth."

The family’s role in society is irreplaceable since it is the only true channel for the existence and perfection of society including Church and State. Families, imbibed with the Fourth Commandment, are the true foundation of any organic Christian society.

Many American families have the impression that the Fourth Commandment is mainly directed at children, as if children are emancipated from this obligation once they become adults. They take this emancipation so seriously that some states even have laws granting emancipation at the early age of sixteen. In California, it’s fourteen. Did God intend a statute of limitations for the Fourth Commandment? Is the application of this commandment different for a thirteen-year-old than it is for a thirty-one-year-old; one who has attained the age of sixteen or sixty-one? Is the meaning of the commandment simply “to obey?” Then why did God use the mandate “honor” instead of simply “obey?” To really understand this commandment, we need to delve into the meaning of “honor.”

The Concept of “Honor”

The few authors who write about the subject of “honor” agree that it is one of the hardest human concepts to fully define. Perhaps, one of the most prominent images in people’s minds relating to honor is dueling. Although wrong in its conception, and contrary to Church teaching, dueling did reflect a remnant of an age where honor was given the highest value, more than life itself. You were either a man of honor or you were nothing. In duels, honor is mistakenly used in one of its highest meanings.

What honor really involves is the esteem and good reputation in face of one’s peers because of a quality that shines forth. Some examples of this use of the word “honor” might be found on a bumper sticker that says: “My son/daughter is an honor student in whatever Middle School”; in the expressions, “It’s an honor to meet you,” or “Can you do the honors?”; when we address a judge as “your honor,” and prominent political figures as “the honorable Mr. Smith”; or a Marine recruitment billboard that says, “Honor” giving the impression that the word defines the soul of the Marine.

A further study of honor reveals more complicated meanings and applications, especially in the context of various cultures and traditions. But scholars do agree on at least three characteristics of honor: it is universal; it can be acquired, lost, diminished or increased; and finally, it involves enjoying good esteem among groups of people.

As Christians, we will limit ourselves to how the Hebrews, Romans and Greeks understood honor, as these were the main cultures during the time of Our Lord Jesus Christ.

The Highest Application of Honor

“The Spirit of the Family”

According to Saint Thomas Aquinas, the honor we owe our parents, according to the Fourth Commandment, must necessarily be the highest in the natural order for three reasons: first, they participated with God in the act of creation; second, they participated with God in His Divine Providence; and third, they were our first teachers. Here we have the first insight into what the “spirit of the family” means. It is based on the reality that our parents have the honor of participating with God as co-creators, co-providers and co-teachers. It is also based on us, the children, receiving so much from our parents gratuitously. In the same spirit that God, out of His goodness, created heaven and earth and blessed it with an abundance of gifts, likewise our parents gave us an abundance of gifts.

The book of Ecclesiastics points out that “For the glory of a man is from the honour of his father, and a father without honour is the disgrace of the son” (Ecclesiasticus 3:13).

We need to remember that honoring our parents is based on excellence.

These are not honorable qualities

Therefore, the “spirit of the family” is the unity of virtues expressed in this relationship. This includes the virtues of temperance, justice, fortitude, prudence, charity and sacrifice. This spirit is seen reflected in all of creation. We see this in the plant and animal kingdoms and in pagan people.

This is expressed as well in temporal society, like in the feudal relationship, in calling a king the father of his subjects, or referring to the signers of the constitution as the founding fathers.

We see this in the Church when Our Lord Jesus Christ addressed his followers as “my brothers and sisters,” and when He instructed us to pray to Our Father in heaven. We call the Church, Holy Mother Church and Mary, Our Heavenly Mother. We use titles like Holy Father, Reverend Father, and Mother Superior. All these are expressions of the “spirit of the family.”

The Necessity of Honoring our Ancestors

Throughout history, the family has always been understood to mean the unity of the whole lineage of ancestors and descendants,” says John Horvat II in his book, Return to Order: From a Frenzied Economy to an Organic Christian Society. He further affirms that if the Fourth Commandment is truly understood and practiced, “families would cease to be modern nuclear families with all the defects inherent to it.

Each family would become dynasties of tradition, where each generation tries to outdo the former in the realm of honor.”

To illustrate this principle, it is interesting to see the importance of genealogy. John Horvat further explains that “family members share qualities and appetites, defects and disordered passions. Yet the family, especially the large family, is also rich in solutions since the individual draws upon family traditions, past figures serving as role models, and corrective or counter balancing traits from the two family lines to hold defects in check.”

To that we can add that families also share common virtues and blessings. In short, our lineage is part of who we are, like it or not, good or bad.

The importance of bringing honor to one’s lineage is clearly evident with Our Lord Jesus Christ. The gospels of Saint Matthew and Saint Luke both begin by tracing His lineage. While Saint Matthew traces Our Lord’s legal and royal lineage through Saint Joseph (Matt 1:1-17), Saint Luke traces His biological lineage by starting with Saint Joseph, going all the way back to Adam (Luke 3:23-38).

The Role of the Natural Leaders and Elites

When people hold themselves to standards of excellence over generations, they form true elites and leaders. Such figures take the Fourth Commandment and make it into an institution. Not only did they trace their lineages, but most importantly, they became a dynasty of honor. This explains why so many true elites sought honorable acts. They founded new continents; fought great wars in defense of the Church; established the best universities and hospitals; and joined religious orders. This is in stark contrast to today’s pop culture of narcissism, apathy and mediocrity. These noble figures sought all forms of honor, especially the honor of heroism and sanctity. In his last published book, Nobility and Analogous Traditional Elites in the Allocutions of Pius XII, Prof. Plinio Correa de Oliveira lists a number of canonized saints who were members of the nobility and true elites as proof of this dedication to the spirit of the family.

The Family Spirit and Society

The spirit of the family is based on the relationship of children with their parents and theirs with God. From this relationship flows all the qualities, virtues, temperaments, customs, and habits, that first are concentrated in the home and then permeate all society.

The institution of the family existed at the beginning of history. But by itself, it can only reach a certain level of perfection.

Society needs the Church and State.

As God took soil, formed it into a body, infused it with a soul, and called it “Adam,” so He did with the family.

The family is the material from which God formed the State, infused it with the Church and called it “Christendom,” or, if you will, organic Christian society.

Ten Ways to Honor Our Parents