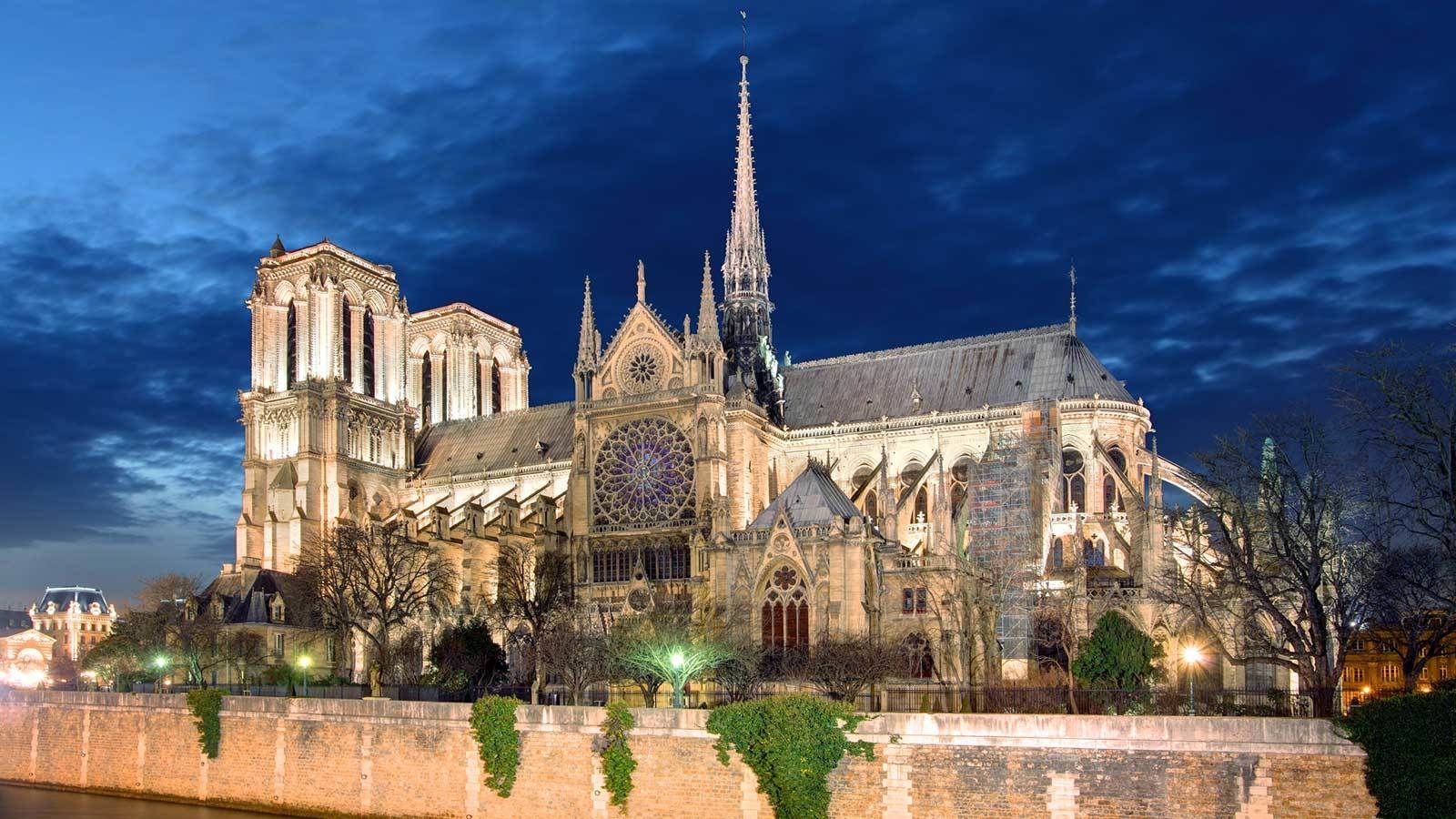 The Light and the Flames: Cathedral Notre-Dame de Paris

In a distant time, I would go regularly to the Sunday Mass in Notre-Dame de Paris with a group of friends from the French TFP. An old canon of the cathedral celebrated the Mass according to the traditional Ordo, which Saint Pius V had established during the Council of Trent as a form to combat Protestant secularism.

Ambience of Grandeur and Mystery

During the winter, the closed cathedral, still wrapped in the last shadows of dawn, seemed to rest. It was so imposing and majestic that we preferred to keep silent while standing outside waiting for the doors to open. Punctually at eight o’clock, inside the sanctuary, old knockers and locks creaked and the great portal shuddered as a small passageway opened to its lower part.

Upon entering, our first pleasant impression was one of being greeted by a sort of “cathedral breath.” It was the breath of centuries, mixing the smell of incense, the dampness of the stones, the fragrance of dried flowers and enigmatic emanations of immemorial ages. Smells of continuity lingered in a powerful tradition, characteristic of centuries-old buildings.

Still in obscurity, the cathedral presented us with vastness and silence. A well-ordered forest of columns, beams, and ribs where nothing moved. In the immensity of the temple immersed in dense silence, invisible presences imposed themselves on one’s senses like angels who inhabit sacred spaces. The breadth of the naves and the height of the Gothic arches widened in our astonished eyes as they peered at the high arches from top to bottom. The sacrality of those blessed places attracted us, slowing our way to the far-off altar where our venerable canon would celebrate. Grandeur and mystery enveloped our senses, creating a fleeting instant in which eternity made itself felt.

Wars and inclement weather had destroyed the stained glass windows at the entrance. They were replaced by others—monochromatic, greenish, expressionless—lacking the splendor of the original panels, the images of which recounted stories of saints in fairy-like colors. However, during the Mass I was able to contemplate minutiae of greatness: figures of the Nativity of Christ, in which faces with touching candor presented themselves as fresh from the hand of the Creator, simple physiognomic traits of accessible personalities, revealing firm and strong intentions, artistic figures proper to elevation and contemplation of the mystery. The creativity of the artists and artisans put on their features supernatural dispositions that translated the sentiments of the medieval soul. The gloom of the morning obscured details of the images but took nothing away from their beauty. One’s imagination completed what the eyes did not discern, adding traces suggested by the candid innocence of bygone ages.

By the end of the Mass, the sun was already beginning to light the stained-glass windows. First those of the apse facing the Levant, where the Light of the world, our Savior, came from. Their colors are particularly pure since they come from the Middle Ages. Inside the temple, they shed light, colors and wonders on those who behold them. But on the way out, contemplating the greenish light of monochromatic stained glass, we would think of a “submerged cathedral” resting on the bottom of an ocean, waiting for a faithful people to rescue it and bring it up. And so we would leave Notre-Dame and its maternal tenderness after the traditional Sunday Mass.

Outside, we would take one last look at the tender grandeur of the cathedral.

Looking from afar, it seems domineering to the point that the surrounding city disappears from one’s attention, obliterated by its greatness. The façade evokes a fortress in which the towers stand out like massive turrets supported by buttresses. Those towers watch all things stirring at their feet and symbolize the eyes of God, Who sees everything. They are joined in their seriousness by the Law and the Prophets, evoking both the Old and New Testaments, represented by sculptures on the façade.

On other occasions, looking at it from afar, its stones become lighter in color and even rosy at certain times of day. Its welcoming countenance then deceives our sense of observation by making it look as small as the cathedral of a miniature village; and its façade, with a tender gaze which appears to ‘see’ everyone, seems to be looking for friends. By displaying meekness, the cathedral awakens in the children of God a desire to approach. There is nothing crushing about its majesty.

Between the two towers, the Mother of Mercy holds her Son in her arms, softening the rigor that the portentous steeples so opportunely inspire. If the inflexibility of the towers proposes an examination of conscience, next to them the central rosette frames an image of Our Lady like a smile of forgiveness given to repentance. Mary tells us that the severity of the towers is destined for the enemies of the Church, the unrepentant, and to what impenitence may exist in each of our souls. But She helps those who seek her with a contrite heart.

Notre-Dame observes and invites us, expressing itself, as it were, with a human countenance. It gently penetrates souls, calling them to Religion. This call is like a divine breath that shakes the materialism infiltrated in souls, restoring aspects ruined by the errors of this century. Whoever visits it never forgets; it remains in one’s memory as the place of this world in which souls find refreshment. And it resurfaces in one’s mind just as the light returns to illuminate its stained glass windows after the darkness of the night. Its solace is indelibly recorded in one’s memory. Could this subtle impression be one of the gifts of Notre-Dame that attracts so many visitors?

Filial affection makes it imaginable to take the cathedral in one’s arms. In that, it resembles the central image on its façade, representing Our Lady holding her Divine Son in her arm. The countenance of the daughter of Saint Joachim and Saint Anne—Notre-Dame, Our Lady—represented here by the Temple of Jerusalem, transpires through its lines and architectural adornments.

A Fire That Illuminates

The fire had just consumed a significant part of Notre-Dame. Horrified, we saw the catastrophe that absolutely could not have occurred: voracious flames, as if from Hell, calcined that heavenly place, bringing to memory an innocent and virginal Saint Joan of Arc condemned to the bonfire.

At that moment, both Joan of Arc in her atrocious agony, and the cathedral in the midst of flames conveyed an image more holy than ever. Both grew in the consideration of all men. Their beauty acquired a new splendor illuminated by the flames of sacrifice. Such is the beauty of martyrdom.

As the fire ceased, the images of the cathedral’s mercilessly burned interior cause deep pain. The ashes of the sanctuary come down upon our mourning hearts. Yet, if one day it should disappear it would leave in the minds of those who venerate it an image even more beautiful than it had during the almost nine centuries of its splendorous existence. Notre-Dame will not disappear, nor is it permissible to restore it with another physiognomy.

A People in Mourning

The day after the fire, I approached the cathedral, though fearful to see it in the desolation of ashes. Since it had been cordoned off, large numbers of people surrounded it as best they could, in small groups. They were mostly silent or spoke in a low voice, in the most diverse languages. Whether Catholics or not, their faces showed consternation and grief as if they had lost a beloved relative. A feeling of orphanhood hovered upon all, even those who had not explicitly taken Our Lady as their mother. Groups of young people, kneeling and contrite, prayed the Rosary.

I incidentally ran into a lady who owns the cleaners’ shop that I use. Since she had always been concerned about dressing very properly and showing off her jewelry and station in the world, I never imagined finding her there, where there was no room for trifles. I greeted her mechanically, almost without making eye-to-eye contact, but she held me back. For the first time, I noticed traits of seriousness under her thick makeup: “I could not hold back tears as I watched the live broadcast of Notre-Dame in flames,” she said. I never imagined that one day I would see tears running on so many layers of makeup.

People, and particularly young people, displayed a rare feeling these days: pain caused by an elevated reason. It was not the sorrow for losing one’s job or for one’s favorite team losing a match. Notre-Dame had suffered this tragedy on the first day of Holy Week, the ceremonies of which recall the Sacrifice of Our Lord Jesus Christ on the Cross. In one of these ceremonies, the Lamentations of Jeremias concerning the desolation of Jerusalem punished by God are recited. By mentally replacing the city of Jerusalem with Notre-Dame Cathedral, we were able to feel, there and then, “How doth the city sit solitary that was full of people! How is the mistress of the Gentiles become as a widow…The ways of Sion mourn, because there are none that come to the solemn feast” (Lam. 1:1,4).

In Jeremias, those prayerful young people and the tearful public around them would find proper terms to describe that hour of pain.