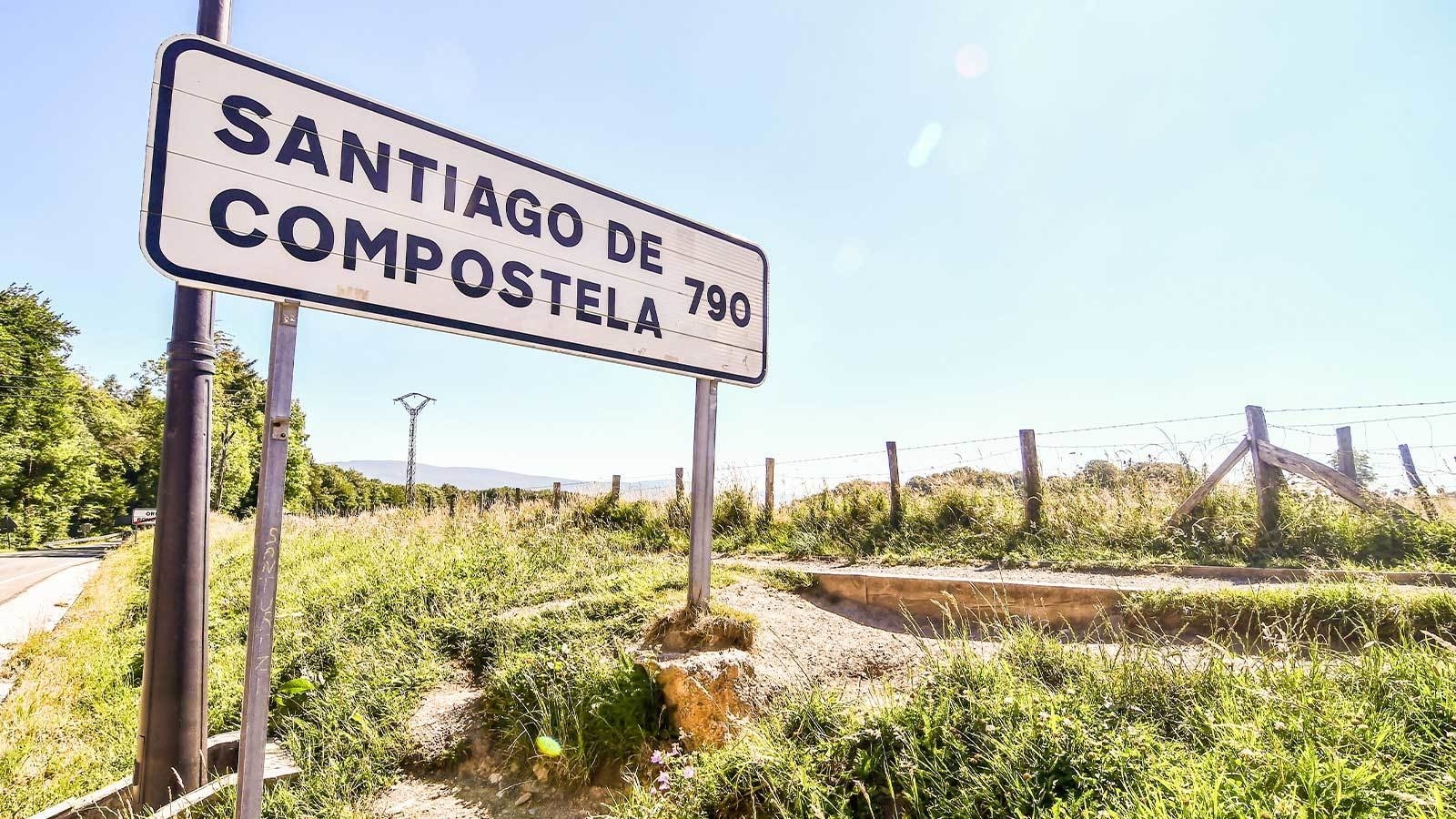 From time immemorial, men have made pilgrimages. Every year, for example, the Holy Family made the 100-mile pilgrimage from Nazareth to Jerusalem for the feast of the Passover.

For two thousand years, Catholics have journeyed to the Holy Land to see and touch the very places where Our Lord Jesus Christ shed His most precious Blood for our salvation. Pilgrimages reached their height during the Middle Ages when millions left their homes to venerate holy relics in cities such as Cologne, Canterbury and Rome.

The Crusades were combative pilgrimages to free the Holy Land from the Muslims who persecuted pilgrims.

One pilgrimage site that still holds a special place in the hearts of Catholics is the Cathedral of Santiago de Compostela in northwest Spain, the burial place of the Apostle Saint James the Greater. The evangelizer of the Iberian Peninsula, he planted the seeds of Faith in countries that would become bastions of Catholicism.

In 44 A.D., Saint James became the first of the Apostles to be martyred when Herod Agrippa ordered his beheading in Jerusalem. The apostle’s disciples took his remains back to northwest Spain, where after some time their exact location was lost.

In the year 813 A.D., Bishop Theodemir of Iria Flavia in Galicia informed King Alfonso II of Asturias that Saint James’ body had been found.

A hermit named Pelayo saw a dazzling star over a field—thus, the name “Compostela” which means “field of the star.”

Upon inspection, the field yielded the long-lost remains of the apostle. Hearing the good news, the pious King Alfonso, known as “the Chaste” because of his exemplary purity, became the first pilgrim to the site of the holy apostle’s tomb and ordered the first church to be built over it.

Since then, countless pilgrims have journeyed to Santiago de Compostela to ask for Saint James’ intercession.

The Cathedral of Oviedo

Along with two good friends and fellow TFP members, Peter Shibler and Kenneth Murphy, I had the opportunity to follow in the footsteps of King Alfonso the Chaste by walking the 200-mile pilgrimage known as the “Camino Primitivo” (the Original Way) from the Asturian capital of Oviedo to Santiago de Compostela from May 14 to 26, 2019.

There is an ancient saying repeated especially by the inhabitants of Oviedo that “he who goes to Santiago but not San Salvador [Cathedral of Oviedo], visits the servant and not the Lord.”

When we entered the Cathedral of Oviedo, we understood the saying. It houses the Holy Sudarium, the cloth used to wipe Our Lord’s face when He was taken down from the Cross. The blood markings exactly match those on the Shroud of Turin.

Among other relics, the cathedral houses a sandal belonging to Saint Peter the Apostle, a piece of Saint John the Baptist’s skull, and the Cross of Victory held by Don Pelayo during the miraculous Battle of Covadonga.

In a niche next to the altar of Our Lady of the Immaculate Conception is one of the six water containers from the Marriage Feast of Cana that Our Lord used to change water into wine. To our amazement, the massive stone jar holds 26.4 gallons (100 liters), proof that Our Lord was not stingy in His miracles!

The ancient custom is that pilgrims touch the stone vessel with their staffs, which we did with care and veneration. We could not think of a better way to start our pilgrimage than to have first greeted Our Lord in Oviedo.

Only about 4% of the total number of pilgrims who walk to Santiago de Compostela go on the Camino Primitivo. That is because, while not as lengthy as other caminos, it is the most mountainous and rugged of them all.

The extreme elevation changes make it difficult, having to climb up and down steep mountains and valleys day after day. The mountain paths can be very uneven and rocky, while the forest trails are quite muddy in the rain. Furthermore, towns with restaurants or grocery stores can sometimes be sparse.

One of the primary purposes of doing such an arduous pilgrimage should be to pray and do penance for one’s sins and for the sins of others. Our Lady of Fatima told Sister Lucy that many souls go to Hell because they have no one to pray for them. The act of doing penance is a special form of prayer that benefits our souls and the Communion of Saints.

We spent many hours praying rosaries for poor sinners and for various intentions, especially for the repose of deceased relatives and friends. We also prayed and made sacrifices in reparation for scandalous sins such as the “Drag Queen Story Hours” and for the sin of abortion.

One special intention we offered up was for all the “Rosary Rally Captains” of America Needs Fatima and for their continued success in praying the Holy Rosary in the public square.

We made an effort to treat this pilgrimage as a spiritual retreat. We would read parts of Saint Louis de Montfort’s True Devotion to Mary. This pilgrimage was to be a renewal of our consecration to the Blessed Virgin Mary as slaves of love.

To maintain the spirit of sacrifice, we established some rules for ourselves. For example, we pledged not to complain. Whether we were hungry, suffering from sore feet and blisters or encountered any practical inconveniences (no hot water, hard beds, etc.), we would not voice our complaints. If we had to tend to a legitimate need, we would just say “I need to fix something.” Comic relief came, however, whenever Mr. Murphy would blurt out, “My feet feel great!”

With the hardships, came great benefits. We were privileged to be able to experience the ancient Catholic culture of Spain.

In the city of Lugo, for example, the Cathedral of Santa Maria has had the Blessed Sacrament perpetually exposed for over a thousand years in reparation for the Gnostic-Manichean heresy of Priscillianism which denied the Sacred Humanity of Our Lord Jesus Christ.

We felt goosebumps as we joined the daily Eucharistic Procession after the 8:00 p.m. Mass. All along the Camino, the many ancient chapels, churches and roadside crosses and shrines were evidence of a time when the majority of men put God at the center of their lives.

Though rugged, the nature of the Camino Primitivo has a captivating beauty. The ubiquitous wildflowers contrasted with the jagged rocks and lightened our spirits.

The grand panoramas of the mountainous regions were an invitation to meditation and contemplation. Sometimes the scenery was so beautiful that it was paradoxically painful, making us yearn for the Heavenly Home for which we are all made.

On the morning of May 25th, we were 45 miles away from Santiago de Compostela. After covering 155 miles in ten days, the Camino had fortified us physically and spiritually. We decided to do something more daring. We would walk the last 45 miles all day and through the night, stopping only for meals and short breaks.

Hour after hour passed interminably. Once darkness enveloped us, we used a headlamp to avoid stumbling on the uneven trail. We scanned constantly for the yellow scallop shell trail markers. As we walked in the dense eucalyptus forests, the only sounds we heard beyond the steady cadence of our steps was the sound of birds, startled by pilgrims walking in the night, and the distant barking of dogs.

At midnight, we prayed Saint Louis de Montfort’s Act of Consecration to Jesus Christ through Mary Most Holy. By 3:00 a.m., we climbed to the top of Monte de Gozo (Mount of Joy) and beheld, three miles below us, the illuminated towers of the Cathedral of Santiago de Compostela, sparkling like a diamond! Somehow we had pushed beyond our normal physical limits. Out of sheer exhaustion, we decided to take a nap on the ground behind a nearby chapel. At 6:00 a.m., we continued down the mountain to the cathedral.

It is difficult to convey what we felt as we entered the main square and gazed up at the cathedral spires. Joy, relief, exhaustion, gratitude, soreness and a profound peace all mixed together. Inside, we each gave the massive statue of Saint James the traditional pilgrim’s embrace. Then we descended to the tiny chapel that houses his remains to pray.

Saint James, just as we successfully completed this pilgrimage, help us succeed in the Camino of Life. Help us persevere in face of adversities, through storms, mud, pain and exhaustion. Keep us on the straight and narrow path as we climb up and out of this valley of tears. Give us hope and confidence that, in the end, we will reach the Heavenly Cathedral to be with God, Our Lady and all the saints forever. Amen