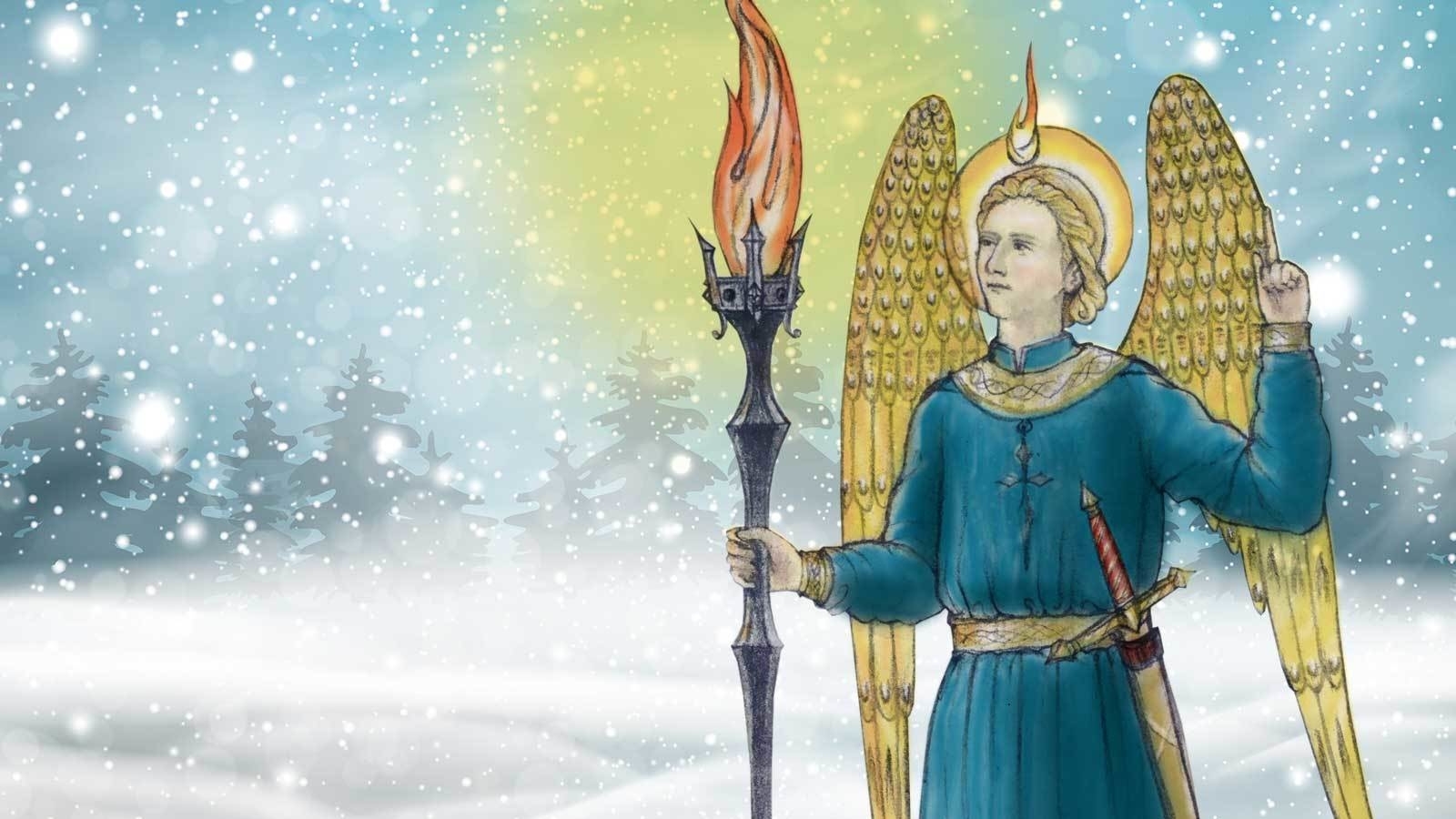 Of all the angels, he was the last!

Of the billions of pure spirits God created, immensely more numerous than all mortals that will exist until the end of the world, distributed in an immense hierarchy of nine angelic choirs, he was at the lowest level. All angels, without exception, were superior to him. Far below him were only us men.

But above all, do not think he had any bitterness or disappointment being last angel. On the contrary, he was a particularly joyful and happy angel. In fact, he would have nothing to do with Lucifer’s revolt, who tried to recruit him thinking he might get him to feel unjustly discriminated against. “Follow me,” the Tempter whispered to him, “and the last of the last will become like unto God.”

He would have burst into laughter and turned a cold shoulder, if he only had one, but those are actions proper to us men. So he asked a simple question that was heard from one end to the other of the heavenly vault, “Quis ut Deus?” His phrase was taken up by the Archangel Saint Michael, who turned it into his war cry with the success that we all know: under his leadership, after a huge battle, two-thirds of the heavenly hosts cast the rebellious demons into Hell.

From then on, the last angel was spending his eternity doing good on Earth.

Being a pure spirit, as you know, he had no body. But he possessed an intelligence immensely superior to ours, a will free of hindrances and a power over the whole temporal world limited only by the designs of Divine Providence. Furthermore, he never had to learn anything—God had given him knowledge from the moment of his creation. He employed his strength and discernment to influence the material conditions of our everyday life. Whenever he went, the air would become lighter, birds would sing more joyfully, flowers would blossom and people would be inclined to become better.

He was the angel who reestablished peace in nature after great storms; the one who made the return of spring so wonderfully pleasant; who keep cool the stone room where harvesters would come to rest; who made sure abundant fruits would be picked in autumn and who always created a cozy, comforting ambience around crackling fireplaces when snow covered the countryside.

He patrolled the earth taming the effects of savage nature, making life more bearable for humans and encouraging them to practice virtue.

His intervention upon the elements brought back hope to men’s hearts. It was a humble action that he carried out with ingenuity and discretion, but he figured it did not accomplish everything he was called to realize.

Prone to make conjectures, he thought God would perhaps one day give him a special mission. “I will undoubtedly become someone’s guardian angel; being the last of angels, he will probably be the last of men,” he said to some great archangels of Paradise who knew more than he did but were happy to simply look at him and smile.

And while he had no clue what was going on, he noticed unusual activity in the heavenly dome. But since in their continuous activities to help maintain Creation none of his elders would stop to tell him what the story was, he simply kept going around the world.

He had been fulfilling his task for several thousand years, which is a lot of time for us but just a little bit of eternity for an angel; and one evening, one of the magnificent seraphim seated very close to God’s throne, came to see him. “Our Sovereign Creator has a mission for you,” he said. “Go quickly to apply your talents to help some poor people at the place I will indicate.”

Rushing to cover the immense distance separating him from the spot he was sent to, and not knowing what he was going to find, he enters a poorly lit place in the countryside. He looks around and notices the smallest, weakest and poorest of all the children of men. At that point, a marvelous light illuminates the simple grotto he is in and he sees the whole heavenly court is also present, with billions of angels ascending and descending and singing a new and extremely sweet song.

“Hurry up, you can see that he is cold,” the seraphim tells him. It was only at that moment that he learned that God was made man and that his mission was to protect the little baby and His mother, the Blessed Virgin, and His adoptive father, Saint Joseph.

Quickly, he approaches the donkey and the ox sleeping deep into the grotto and has them warm the newborn with their breath; he smoothes out the hay to avoid that any wisp should hurt the baby; and he spreads in the air an aroma of Christmas made with fir tree resin, warm wax, orange blossoms and diverse candies.

The Child smiles at seeing him. He is the last, but the happiest of angels.

Ever since that night, the last angel goes around the Earth annually to make souls of good will smell the sweetness, perfume and spirit of Christmas.

So now, please, look around you and be sensitive to his presence. You will perhaps figure that he has just passed by in the flickering candle before the crèche, in the brightness of a Christmas bauble suspended from the fir tree or in the sweetness of the chants during midnight Mass.

A Note from the Author:

Yes, dear Reader, this is only a Christmas tale, but the last angel really does exist. I don’t know his name, but in any case our poor human intelligence would have great difficulty understanding the meaning and beauty of an angel’s name.

Furthermore, he was the one who suggested that I write this tale. When I objected that perhaps not everything would come out just right, he laughed, raised his shoulders and said, “All you’ll have to do is to put a note at the end. Those smart enough to keep their child-like souls will be delighted, and those who can see with the heart will know.”