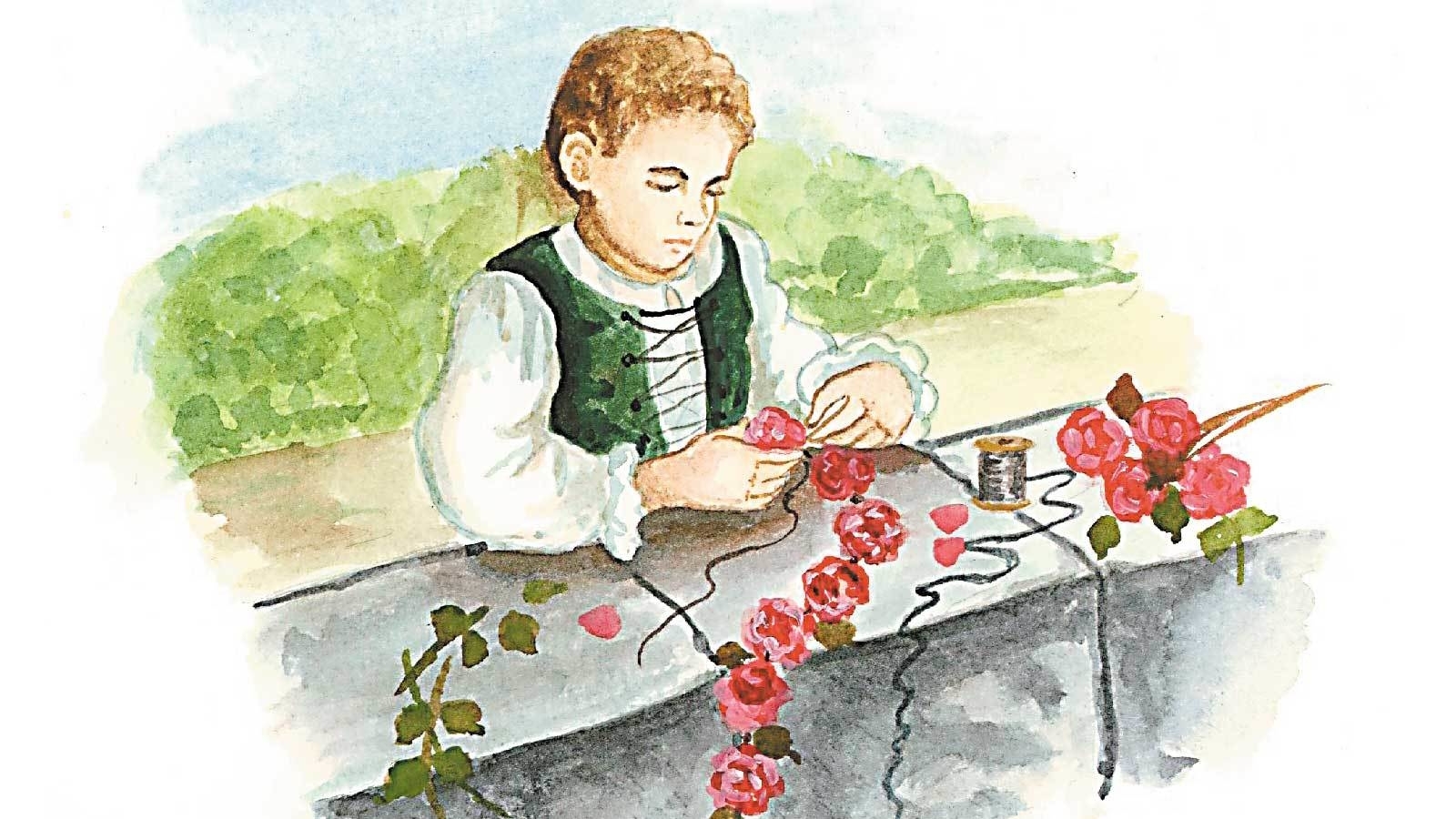 Wreaths for the Queen

Little Angelo lived in a winterless country where the weather was pleasant and sunny, the air was fragrant and flowers abounded. Angelo never saw snow or ice. He never had to stay indoors to keep warm. He spent hours on end outdoors, and at night sleep came fast and heavy.

However, one day Angelo fell seriously ill. His mother worried and nursed him night and day, watching for the smallest sign of improvement. But it never came. The poor woman cried and prayed, until, one day, looking through the window at a statue of the Mother of God in the garden, she had an inspiration. Taking her young boy in her arms, she rushed outside.

Setting the sick boy on the ground before the statue and kneeling she prayed: “Holy Mary, Mother of God, my child is very sick, as you can see. Please make him well again. Mother, you loved your child Jesus. Have pity on this mother who also loves her child as you loved yours. Restore his health. Make him well again and I promise to teach him to love you, and serve you and to show his love for you always.”

Just as she spoke these last words, Angelo opened his eyes and smiled up at his mother. She knew that her son was cured, and joy filled her soul.

After that, the good woman taught Angelo to select flowers from the garden and to make wreaths of them.

He would then take them to the beautiful statue of Our Lady and place them at her feet. Kneeling down, he would say: “Holy Mother of Jesus, and my Mother, I give you this wreath of flowers to show you that I love you. I thank you for all you have done for me. Help me to keep my soul pure. Bless and keep my mother and my father.” Then he would recite the “Hail Mary.”

When he had finished his prayer, he would sit down near the statue and just look at Our Lady. He liked to “keep her company” and think about her at length. He imagined how beautiful and queenly she must be in person. Then, standing up, he would reverently bow and run on his way.

The years went by and Angelo grew up, and his love for Our Lady grew as well. Now a young man, he loved Our Lady more than ever. He had never ceased making her a wreath of flowers every day. In the depths of his soul, he began to hear her calling to him,

“Come, my son, up to the mountains, to my monastery of Saint Dominic.”

So one day, Angelo came in from the garden and said to his mother: “Mother, I must speak with you. Having thought and prayed much, I am convinced that Our Lady wishes me to join the fathers and brothers at the monastery of Saint Dominic in the mountains, to spend my life praying and working with them.”

His good mother was both happy and sad: happy that Our Lady had done her the honor of choosing her son for her own service; sad because of the necessary separation. Yet, she blessed God and the dear Lady for this privilege.

So, Angelo went up the mountains and was admitted as a novice in the great monastery of Saint Dominic. He soon donned the white habit.

For a time he was clearly very happy. One day, however, the abbot, Father James, noticed that Brother Angelo was a bit downcast. Approaching him, he said:

“Brother, until recently you seemed content here, but now I see a shadow of sadness across your face. Will you tell me the reason?”

“Father,” answered the young friar as he stood by a window, “look outside and tell me what you see.”

The abbot did as the young brother bid and said:

“Well, I see the snow falling and blown all around by gusts of mountain air. I see many snowy peaks and valleys. But I see nothing unusual. It is always so up here…”

“Exactly, Father. Where I come from it is always green and flowers are abundant.

When I was a small boy I was healed of a serious illness after my good mother placed me at the feet of a statue of the Mother of God in our garden.

From that day I formed the habit of offering a wreath of flowers to her each day. I feel amiss in being unable to do that now, for it was my homage of gratitude to her. I believe that it kept me close to her and always in her service.”

Hearing this the abbot reached into a pocket of his white habit and brought out a Rosary. He held it out to Brother Angelo.

“Take this Rosary, my dear Brother, and be sad no longer. This is a wreath of flowers that Our Lady loves much more than the wreaths you used to give her. When you pray the Rosary, every “Our Father” and every “Hail Mary” changes into a beautiful rose in Heaven. There, the angels gather them and weave them into a crown that they present to Our Lady. She is more pleased with these heavenly flowers because they are much more beautiful than the flowers on earth. And these flowers do not fade but bloom forever.”

Brother Angelo took the Rosary and kissed it. From that day, every day, as the sun began to set, the brothers saw him seated in the chapel before the statue of Our Lady, eyes fixed on her, fingers busy sliding the beads, and lips moving quietly. He was glad that he could once again make a daily wreath for his Queen in Heaven.

One day Abbot James had a message to send to another monastery of Saint Dominic, and decided to send Brother Angelo and Brother Joseph with the important letter.

So the brothers descended the snowy slopes. They walked for many days until they came to a dense forest. As the sun began to sink below the horizon, they had almost reached the other side of the forest when Brother Angelo spoke:

“Brother Joseph, let us sit here on this log for a while and rest.”

As they sat, Brother Angelo pulled out his Rosary and said: “This is the hour when I always make a wreath of flowers for Our Lady. Let us recite the Rosary.”

And so they began to pray. Absorbed as the two friars were, they did not hear two highwaymen stealthily approaching them from behind intent on killing and robbing them.

As the two criminals raised their knives to strike, everything suddenly became pitch dark for them. They could see nothing. As the wretches stood paralyzed, a great light appeared before them. Within it they saw not only the two friars but also many angels. In the midst of all stood the most beautiful lady they had ever seen. As the friars prayed, the robbers noticed that the angels were making a wreath of white roses. When they finished, they presented it to the lady, who received it with a radiant smile.

Then they heard Brother Angelo say:

“Now, Brother Joseph, let us pray another Rosary for evil men, those who are great sinners, so they may come to realize their wrongdoing and turn back to God.”

As they began reciting this Rosary, the robbers saw the angels again busy at work weaving another wreath of roses. These roses, however, were blood-red. As the brothers prayed and the angels wove, the heavenly lady standing in their midst suddenly raised her beautiful eyes to the two astonished criminals. Immediately they fell to their knees, feeling as if their hearts were pierced by a sword. Burying their faces in their hands, they began to weep, feeling a great pain in their hearts for their terrible sins. They understood how black their souls were and how merciful God and Our Lady were to them. Hanging their heads, they exclaimed:

When they raised their heads again, they saw only the two friars. These, having heard the robbers’ prayer, had turned around. Now the two criminals were on their knees at the brothers’ feet, telling them of their crimes and their evil intentions toward them and asking them forgiveness. They described the beautiful vision of the Lady and the angels.

When they had finished, Brother Angelo spoke:

“My brothers, God has been good to you. By His blood, which He shed for you on the Cross, He has made you see the wrong you were doing. And through the power of Our Lady’s Rosary you now wish to be God’s friends again. Be sure that your souls will be made white once more if you confess and promise never to commit these crimes again.”

The robbers resolved to amend their lives. From that day onward they did penance for their crimes and sins and completely changed their ways. They, too, prayed the Rosary every day, which helped them stay on the good path and gave them the strength to remain honest and upright for the rest of their lives.

After that day, Brother Angelo was more devoted to the Rosary than ever. He knew that he was not only making magnificent daily wreaths for Our Lady but was also helping many a sinner to return to her. Certainly, these were wreaths more precious than the ones he had made as a child!