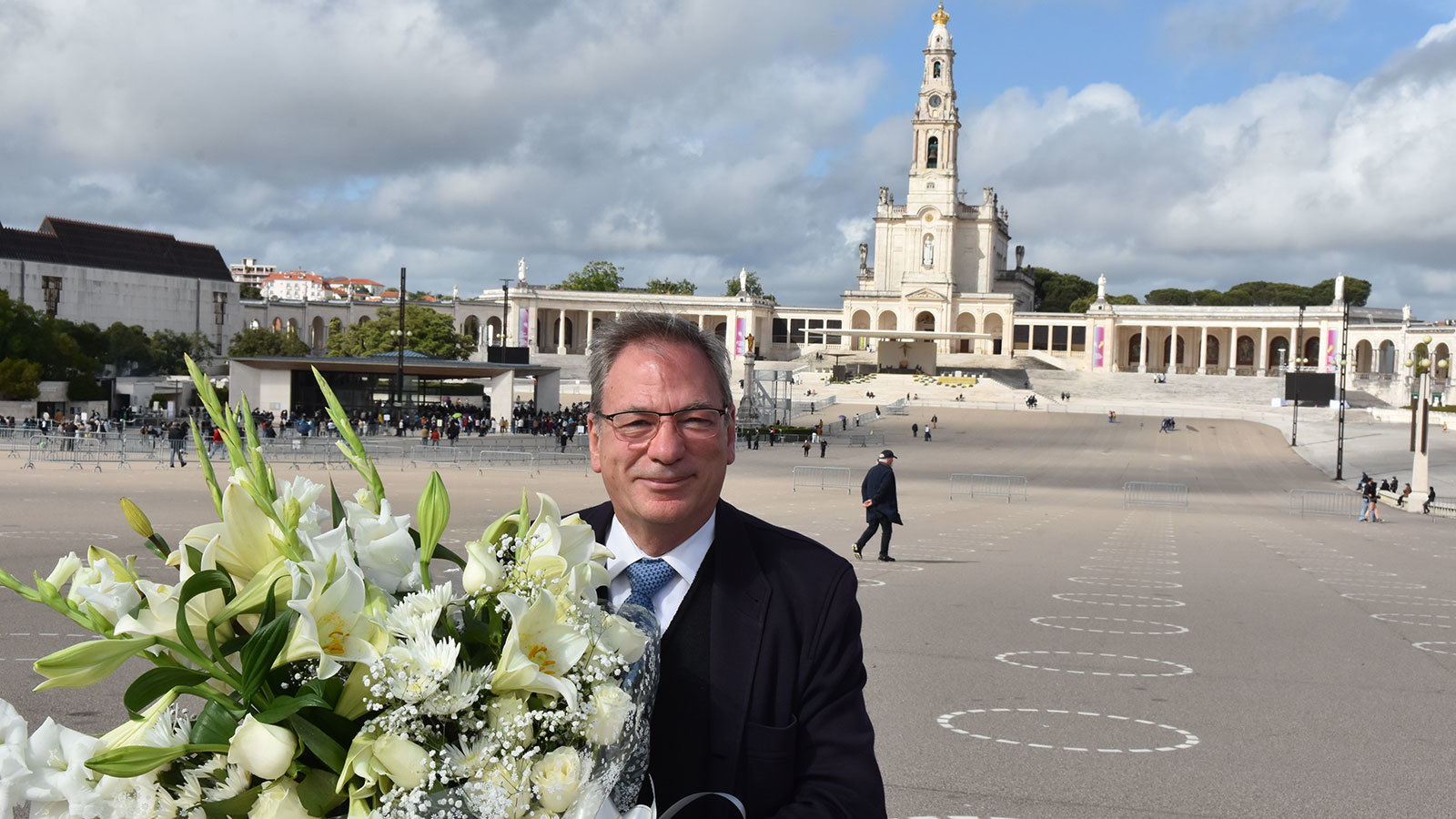 Nothing Can Stop the Love and Devotion

Vigil of the Feast of Our Lady of Fatima

Evening slowly falls in Cova de Iría. The reflection of the last rays of the sun on the horizon gives the esplanade of the Fatima apparitions a melancholic air . . . this time a bit sad.

Little by little, the pilgrims arrive in collected silence, with sanitary masks hiding their expressions. Four months have passed without permission to approach the Virgin, government measures having restricted mobility. Now, finally, they feel freer, even if only a 7,500 person capacity is allowed, compared to the half a million that ordinarily gathered there on the night of May 12.

Yet, the faith of the pilgrims does not fade; they draw near with a spirit of penance and prayer, as the Virgin asked in Fatima. Each family group respectfully remains socially distanced along the entire esplanade, without moving from the white circles marked on the ground that have been assigned to them.

In the circle I have occupied on behalf of America Needs Fatima, there are all of you, 13,598 families. Your names were engraved on the banner of the Virgin carried by my traveling companion, Luis Augusto Rodríguez. As I took some photos, there was a slightly cool breeze, forcing us to bundle up.

Gradually, we were enveloped in darkness. It was already 9:30 pm on the basilica clock. Brightly lit, it glowed like a brilliant jewel in the night. At its feet, invading the entire esplanade, a sea of candles moved gently, accompanying the hymns in honor of the Virgin. In my hands, which were yours, the rosary. And on my lips, your names.

A Rainbow of Roses

It is the morning of May 13, 2021, the 104th anniversary of Our Lady’s first apparition at Fatima, Portugal.

In stark contrast to the dark, serene vigil procession of the night before, this day is marked by bright sunshine and a dome of blue skies—the perfect setting in which to deliver roses of all colors to Mary, the best of all mothers. This was the task that lay before me and I was struck by how great an honor it was to represent the friends and supporters of America Needs Fatima with dignity and devotion.

These thoughts were interrupted by a flurry of activity as my assistant and I met the florist and began the process of unloading more than 600 dozen roses. In describing the abundant beauty of these flowers, words fail me; I trust that the photos taken will give the reader some idea of what an exquisite presentation was made in the esplanade of Fatima. Catholics from around the world, in various languages, commented with words of appreciation and awe upon the beauty of the roses.

In addition to honoring Our Lady’s first apparition, as a special project of America Needs Fatima, the roses delivered in May are a token of love from our supporters in honor of their earthly mothers—alive and deceased—and their intentions. To this end, we offer a variety of colors, each color representing a different sentiment from the giver. As a result, what sprawled out before my eyes was a rainbow of roses!

Since the days of Noah, the rainbow has represented a promise of hope and better days ahead. With America flailing through crises of every kind, the rainbow of roses before my eyes became a message to Our Lady from all of you—

Thousands of Intentions offered to Our Lady! 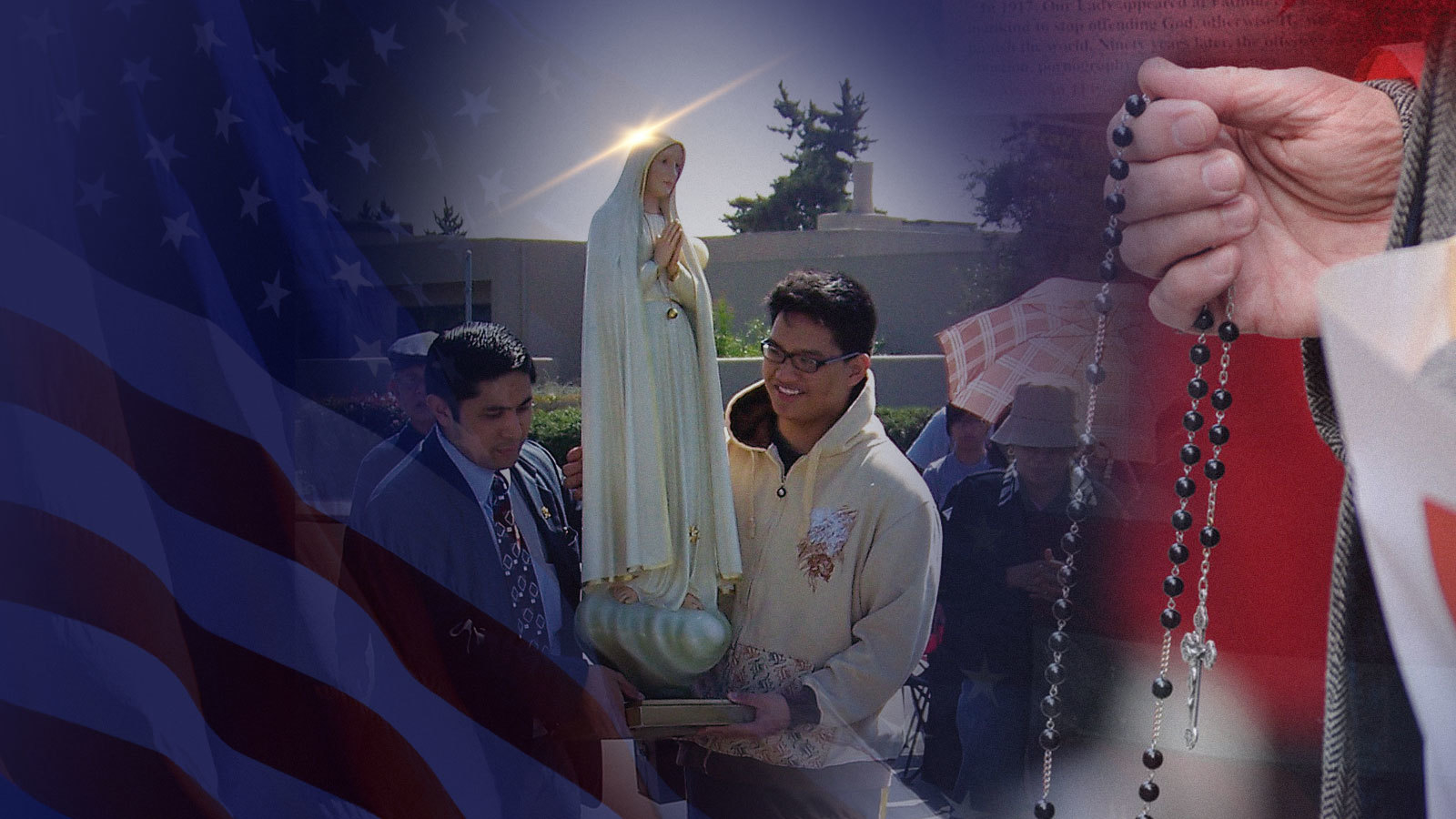 Sign up to become a Rosary Rally Captain in October and pray for our country and the world.