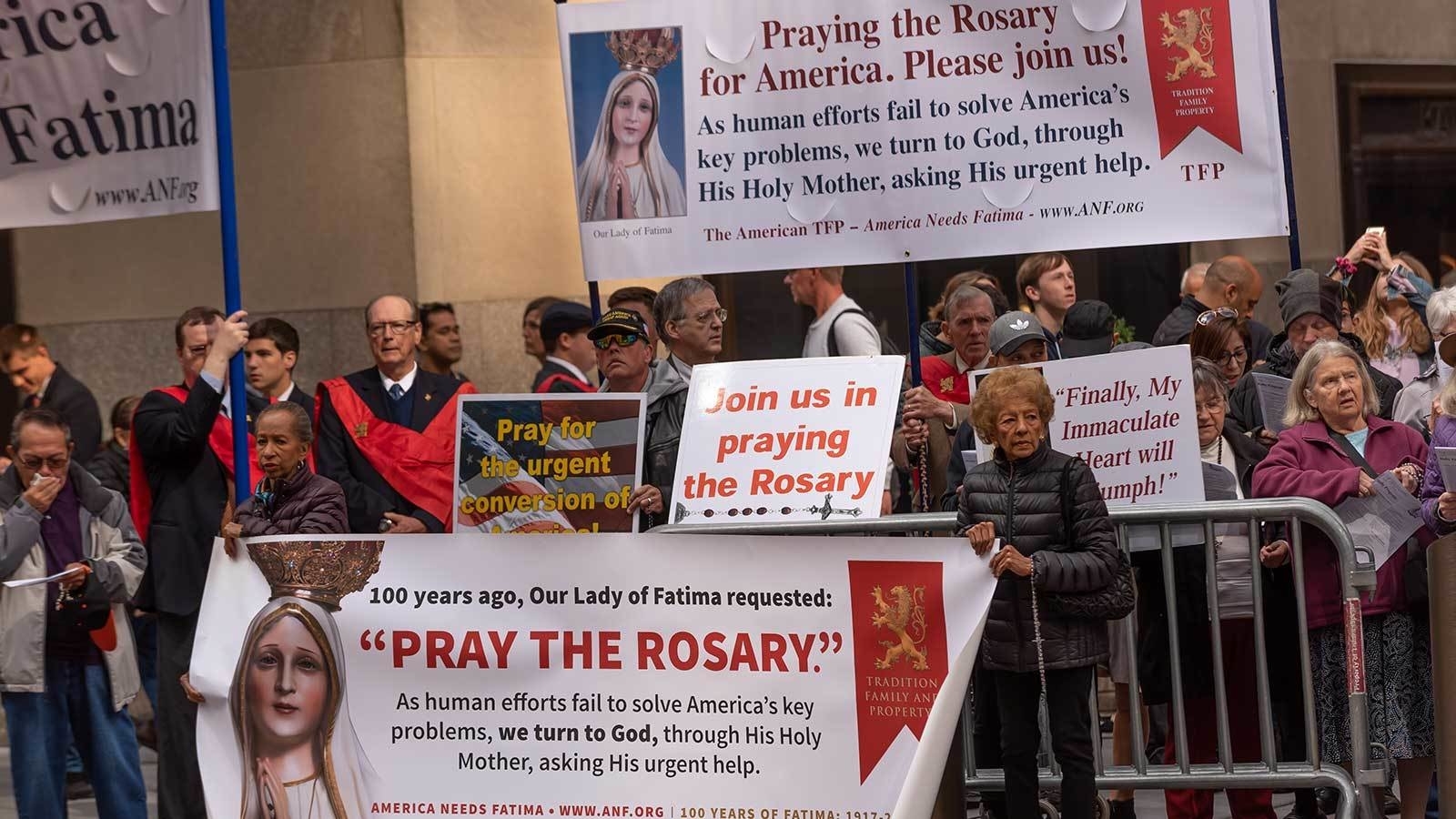 October 12, 2019 was no ordinary Saturday. Across the country as Americans went about their business, people saw the unexpected. The radiant face of Our Lady of Fatima could be seen in thousands of public places.

Was this an apparition? No, but it was a great manifestation. Mary’s faithful children came out to honor their heavenly mother. They came to pray. They came to sing. They came to manifest their faith in God’s power.

There were Catholics praying in public in every state. Catholic Americans stepped out and prayed in big cities: Houston, Chicago, Los Angeles, New York. They could be seen in the remote Pacific Islands: Guam, Saipan, American Samoa. They prayed in English, in Spanish, and other languages. On the side of highways in rural areas, at busy intersections with honks in support—in so many places, public life was met with public prayers.

The Rosary: The Solution for Our Times

The year 2019 has seen no shortage of difficulties. Scandals continue to rock the Church. Public immorality is on the rise. Violence and terrorism threaten many communities. One thing is certain about America’s situation: public prayer is more needed than ever.

In spite of many obstacles, Rosary Rally Captains were more willing than ever to sacrifice. These devoted prayer warriors did all the work: finding a good location, printing flyers, getting the word out. Some experienced Rally Captains have been leading Rosary Rallies for years. Other first time captains rose to the occasion.

They had to deal with the elements. Heat waves, rain and wind, under calm or threatening skies—Catholics prayed in every type of weather.

As the prayers were offered up, the banner of the Queen marked each rally. On the 102nd anniversary of the Miracle of the Sun, Our Lady of Fatima’s face could be seen in public places across the United States. The Rosary Rally Banner with the message asking for a heavenly solution is now part of America’s landscape. Even if one doesn’t stop long enough to read the text, the gaze of the Queen of Heaven speaks volumes.

She gazes as Americans go about their business. She sees so many pass, absorbed in their own cares. She sees others pause and read the banners. Some pull out their phones and snap photos. A few stop and join the prayers. Still others shout insults in opposition.

And she looks out as her faithful children rally to her banner. They pray as she requested at Fatima. Coming at a time when worldly political promises are making headlines, humble prayer warriors were focusing on heavenly promises.

Gaining the Merits of So Many Prayers

One thing’s for sure: Catholics who weren’t at a Rosary Rally really missed out.

In The Secret of the Rosary, St. Louis de Montfort writes:

For the 2019 Rosary Rallies, Catholics were gathered in groups large and small. In some places, they were just two or three. In others, crowds of over 400 participated. The prayers began at the same time and were offered in unity for the conversion of our country. The Queen of Heaven received these supplications, and bestowed the merits of thousands and thousands of rosaries on her faithful children.

And that is not all. So many Americans today are unsatisfied and unhappy with modern life. Fast-paced lifestyles and superficial relationships are leaving a large void.

Contrasting with this, more and more American Catholics are finding true joy by taking a public stand for God. Saint Augustine put it well: “You have made us for Yourself, O Lord, and our hearts are restless until they rest in Thee.”

It is one thing to privately profess one’s faith. It is quite another to take it to the streets. Taking the time to unite in the public prayer of the rosary: this simple act pleasing to the Blessed Mother will ensure our spiritual progress.

To those who pray the rosary, the Blessed Mother promised:

“You shall obtain all you ask of me by the recitation of the Rosary.”

Through the rosary, the Blessed Mother has given Catholics great victories. Will she do the same today in America? That all depends on the confidence of her faithful children.

If the answer is “yes,” we must be willing to take a stand. Like so many others are now doing, we must step out in public, not caring what others think. We must stand for God when so many are turning their backs on Him. We must pray as Our Lady asked us to—with the greatest confidence she will grant everything we ask.

No, the victory will not be easy. Nothing worthwhile ever is.

The mission of America Needs Fatima is clear: to win the United States for Mary Most Holy. God certainly wills the conversion of America. He is constantly sending the needed graces for this to happen. But since hearts are openly hostile to these graces, we must call upon the Queen of All Hearts to intervene.

To those who have been Rosary Rally Captains for many years, the power of the rosary is no secret to them. But so many Americans still do not call Mary their mother. And among those who do, the rosary’s power is still a mystery to them.

The annual Public Square Rosary Rallies are an excellent opportunity for so many Catholics to recommit to spreading the rosary. More and more captains are organizing monthly public rosaries in their communities. With confidence in Our Lady, she will complete the work already begun.

Entrusting the Public Square Rosary Crusade to the intercession of Our Lady of Fatima, let us claim this land for her by raising her banners in more places. Queen of the Most Holy Rosary, pray for us!

Banners and Roses in Fatima: October 2019

The courtyard before the Shrine of Our Lady of Fatima is filled with light on the eve of the 102 Anniversary of the Miracle of the Sun.

America Needs Fatima Banner bearing the names of nearly 11,000 devotees of Fatima is carried in the candlelight vigil.

Fresh red and white roses are presented to Our Lady. Each red rose comes from a Rosary Rally Captain and each white rose represents a Rally Supporter. Over 20,000 roses in all!

Twelve massive red candles created from many thousands of smaller ones sent from friends across America. Antonio Fragelli holds an envelope containing prayer requests that he placed at the feet of Our Lady of Fatima.